How Can Confinement Soups Keep Your Immunity System Strong 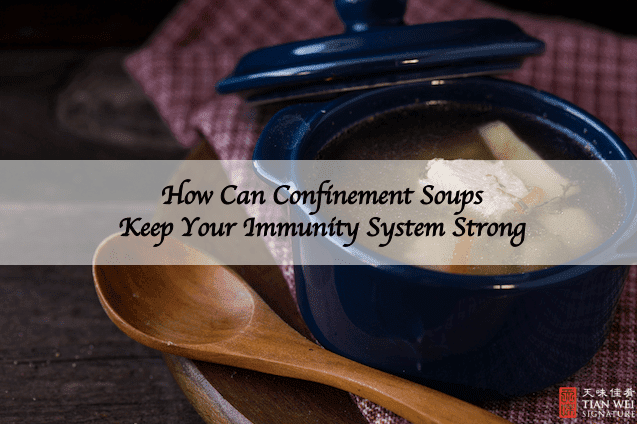 The first month after delivery is crucial for mothers. During this time, the new mother is supposed to adhere to a set of rules to promote quick healing and restoration of the body to its original condition. This includes eating a special diet and consuming many herbal soups prepared to meet her needs at that time. Most mothers usually hire a nanny to take care of her during the confinement period. There are also confinement meal in Singapore as well as food deliveries for the mothers who have just delivered. Therefore, you can choose between the two options if you do not have a relative or nanny to take care of you during this time.

A mother’s immune system is low during pregnancy and the first few weeks after giving birth. This means a slight exposure to any environmental elements such as cold weather could lead to diseases. Her uterus is also empty after delivery, leaving a space that can easily “catch wind” thus leading to difficulties in restoring her energy. Hence, the mother should stay indoors in addition to taking lots of herbal soups and teas to boost her immunity levels.

Confinement soups are rich in nutrients that are helpful to the mother and the child during the first two weeks after delivery. They are simmered under low heat, making them more digestible and easy to absorb into the bloodstream and eventually to the baby’s milk. This makes them a better immunity booster than confinement food that takes longer to digest. There are many ingredients used in the preparation of the soups with each of them playing a significant role in a new mother’s body. Here are a few of them that act as immunity boosters.

Red Dates
You will find red dates in almost every confinement meals Singapore. They are also used in making tea, which is given to the mother instead of taking water. Red dates are very rich in Vitamins A, B’s, and C as well as minerals such as calcium and iron. The dates are great immunity boosters and aid in smooth circulation of the blood in the body.

You May Also Read this : 6 Ingredients That You Will Find In Most Confinement Soups

Ginger
Ginger is not only a powerful ingredient for driving “wind” out of the body but also strengthens the mother’s immune system. The warming herb also stimulates blood circulation in the body and keeps infections away from the mother. Therefore, a mother who suffered multiple tears or one who delivered through a cesarean section should choose a confinement meal package in Singapore that contains ginger.

Garlic
Garlic does not have a pleasant smell, but it has numerous health benefits. It has antioxidant and strong antimicrobial properties that helps kill viruses and bacteria more readily than other ingredients found in most soups. This has made the ingredient more popular in preparing soups for most confined mothers in Singapore.

Mushrooms
Many companies offering confinement meals also provide mushroom broths combined with other herbs to make it more delicious. A new mother will produce white blood cells in the body by consuming soup with mushrooms. White blood cells are the disease-fighting cells that will keep your immunity in check.

New mothers are highly prone to colds, flu, and other diseases due to their low immunity. Choosing the right ingredients while making confinement soups is the secret towards boosting the mother’s immunity and promoting healing. Companies providing confinement meal in Singapore will always prepare different varieties of soups, but you should always aim at getting services that meet your nutritional requirements and health needs.